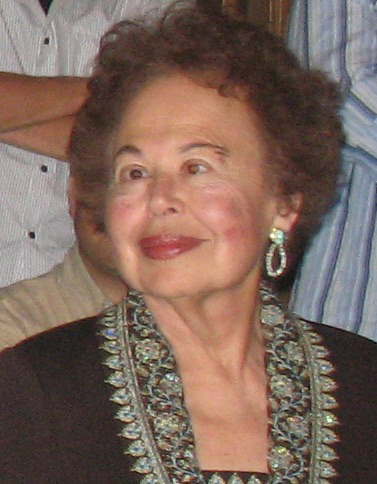 Irma Adelman was born in Chernivtsi, Romania in March of 1930. Irma was the only child of a socialist-leaning Jewish businessman and a mother who studied, but never practiced law, and instead concentrated her energies on raising her only child.  Despite Irma’s Jewish background, she was educated by French Catholic nuns and her family lived in affluence in her early years.  Unfortunately, Irma’s family experienced first-hand the anti-Semitism and discrimination that emerged in the late 1930s and her father foresaw the dark shadow cast all over Europe with the growing Nazi regime and the coming of WWII.  It was in 1939 that the family immigrated to Palestine.

Irma attended and completed high school in Palestine and served in the Israeli War of Independence. It was in 1949 that Irma immigrated to the United States and enrolled as an undergraduate Business Administration major at the University of California, Berkeley.  Soon after her arrival to Berkeley Irma met and married her husband, an American physics PhD candidate. They decided to settle in the United States and had one son, Alex.

After her undergraduate studies, Irma continued her education and enrolled in UC Berkeley’s Economics PhD program.  Given her strong quantitative skills, she benefited from training with Robert Dorfman in economic mathematical models and from econometrics and statistics courses offered by George Kuznets in the Department of Agricultural and Resource Economics. Her classmates in Kuznet's courses included Arnold Zellner, Zvi Griliches, and Yair Mundlak.

After graduating at the top of her class and completing her PhD in Economics in 1955 Irma faced considerable difficulties in securing a tenure-track position in academia, typical of the discrimination faced by many female academics at that time. She held various non-tenure appointments at UC Berkeley, Mills College, and at Stanford University, over several years. During this period, she published her first book (Adelman & Morris 1973), the classic Klein-Goldberger paper (Adelman & Adelman 1959), and the path breaking hedonic pricing paper (Adelman & Griliches 1961), as well as many other publications in leading journals. Yet, she was still unable to land a tenure-track position in the Bay Area. It was in 1962 that a job offer for her husband resulted in the family relocating to Washington, DC.,  and it was in DC that Irma obtained an associate professorship at John Hopkins University, and where she met her lifelong friend and collaborator, Cynthia Taft Morris.  Additionally, it was while she was in Washington, DC that Irma became acquainted with agencies such as United States Agency for International Development (USAID) and the World Bank.  Between 1966 to 1971, Irma worked in Chicago at Northwestern University.   In 1973, she returned to DC and joined the World Bank, along with securing a faculty position at the University of Maryland.  In 1979 Irma returned to UC Berkeley and became a faculty member in the Department of Agricultural and Resource Economics, and where she stayed until her early retirement in 1995. She was a Professor Emeritus of the Graduate School ever since.

The hallmark of Irma’s work is a holistic, systematic approach to economic development. She was one of the first to realize that economic analysis, although rigorous, is partial. It may omit crucial elements and bias understanding of development processes. She therefore pioneered general equilibrium methodologies that incorporated multiple markets, institutions, and qualitative elements, such as culture. Recognizing the limitations of economic research alone, Irma was a lifelong champion of interdisciplinary approaches, borrowing ideas from sociology, psychology, anthropology, and political science. She realized that traditional econometric estimation methods may sometimes constrain the predictive capacity of a wide range of available data, and she therefore applied variety methods, such as nonparametric factor analysis, which had not been considered before in quantifying development processes.

Irma made both conceptual and policy breakthroughs throughout her career. Early in her career, her research emphasis was more methodological, addressing dynamic and stochastic processes. Her classic paper, The Dynamic Properties of the Klein-Goldberger Model (Adelman & Adelman 1959), resulted from a pioneering simulation that confirmed Ragnar Frisch’s theory of business cycles, in which basically stable economies are driven through cycles by random shocks. She also made another important contribution by developing a creative methodology to compute price indices that emphasizes sampling within categories and accounting for product quality differentials. This approach was applied to address differences in product quality and to estimate automobile prices (Adelman & Griliches 1961). This seminal paper was the first manifestation of the notion of hedonic pricing, which was later popularized by the works of Rosen and Lancaster and which would later become a mainstay of applied economics. In Society, Politics and Economic Development: A Quantitative Approach, Cynthia Taft Morris and Irma Adelman (Adelman & Morris 1967) Adelman and Morris championed the use of joint principal-component models to integrate a broad range of both quantitative and qualitative data on the characteristics and properties of development processes, to identify key factors affecting various countries, at different levels. This was a pioneering application of principal-component models, quantifying the role of institutions and income distribution in development processes.

Perhaps Irma’s most important methodological contribution was the creation of a pioneering large-scale computable general equilibrium (CGE) model. This modeling approach was the result of understanding the forces that shaped the Korean development process. The final product, Income Distribution Policy in the Developing Countries: A Case Study of Korea, coauthored with Sherman Robinson, includes 3,000 endogenous variables that quantified how individual sector behavior (including noncompetitive behavior), the macro economy, income distribution, and various neoclassical and structuralist features changed the process of development (Adelman & Robinson 1978). Unlike the Johansen (1982) model that solved for rates of changes of key endogenous variables, the CGE model actually solved for the levels of these endogenous variables over time. The high degree of detail and specifications of the model allowed for sophisticated policy experiment, especially with respect to alternative policies to reduce poverty. The results suggested that absolute poverty was easier to reduce than relative poverty. CGE models have evolved and have been put to wide use over time. Although the features of the Adelman-Robinson model have been streamlined, this classic model is a bedrock for modelers of general equilibrium systems that try to capture the complex interactions within the economy and society.

Irma’s work has left an indelible mark on the thinking of development economists. She realized that, although development economics was emphasizing and quantifying aggregate levels of performance and rates of growth, there was little quantitative knowledge about the impact of income distribution on growth. The leading paradigm among policy makers and development economists alike, was growth before distribution. Irma’s work on Korea, as well as on other countries, has shown that increasing equality and the buildup of human capital among the poor can be a key feature that can lead to economic growth with equity. Irma also realized that one cannot separate economic and political processes, and studied their evolution simultaneously. In Economic Growth and Social Equity in Developing Countries with Cynthia Taft Morris (1973), Irma confirmed the Kuznet’s U-hypothesis that the share of income going to the poor during a development process may decline before it partially returns, if at all. However, she also found that greater political participation resulting from the development process does not necessarily benefit the poor but benefits the middle class at the expense of both the poor and the rich (Adelman & Morris 1973).

Irma’s strength as a scholar derives from her wisdom and capacity to observe development processes on the ground. Much of her analytical and generalized insight originated from her work as a practitioner. In 1963 she was sent by USAID to Vietnam to design an income expenditure survey. She observed that the Vietnamese population was not committed to the war against the North and realized that with existing tenurial conditions the rural population had a large positive incentive to keep a low level of military activity. Due to the war, most of the landlords had left the rural areas and rents had not been collected for as much as three years. At existing rents, rural pacification would mean an indebtedness of about 1.5 years output (Szenberg & Ramrattan 2004, p. 19). This observation led her to recommend an important policy suggestion: a US supported land reform policy to buy land from the owners at market prices and to redistribute it to previous tenants. This policy would help to secure the loyalty of the peasant class and would therefore help to hasten the end of the Vietnam War. Irma advocated this position to no avail. However, this policy recommendation is indicative of Irma’s keen observations.

Irma’s major policy contribution was her work in Korea, where she wrote a proposal for institutional reform and for a change in priorities. Among her recommendations were a shift toward export-led growth, a reduction of tariffs, and the doubling of interest rates to reduce inflation. This policy was incorporated into Korea’s Second Five-Year Plan and became an essential element of Korea’s upward economic growth swing. In 1972, Irma’s contribution was recognized by a presidential decoration, the Order of the Bronze Tower, from President Park Chung-hee.

With deep interest in the wellbeing of the Korean people, Mrs. Irma Adelman, Professor at Northwestern University, has devoted her efforts with superb competence to the economic development of the Republic of Korea and thereby greatly contributed towards attaining the goals of economic self-sufficiency pursued by the Government of the Republic of Korea. Her valuable donation and service has gained for her the appreciation and admiration of the Korean people.

Irma’s work on growth and distribution led her to conclude that development policy should not pursue economic growth per se but should rather pursue the creation of the social and material conditions for the realization of human potential by all. She was an early advocate of the idea that development should not be growth alone but should also include poverty reduction (Adelman 1974, 1975). Although this was a minority opinion in her day, it has become mainstream thinking over the years. Irma’s work as a consultant to the World Bank was crucial in making this shift in priority; as such, her words found the ear of Robert McNamara, who signaled this shift in the World Bank’s lending policy toward an emphasis on poverty alleviation in his speech at the United Nations Conference on Trade and Development (UNCTAD III) meeting in Chile in 1972 ( Szenberg & Ramrattan 2004, p. 20).